Ilhan Güven’s poem “Day dream” begins: “I have a country, without borders, with a single language that everyone commands ...” Having no command of the language and the exclusion associated with it were experiences the immigrants never forgot. In the early years of the so-called "guest worker migration", German language skills were not a precondition and were not promoted, the expectation being that the immigrant workers would soon return home. As a rule, learning the language was a matter of acting on one’s own initiative: they used dictionaries to cope with everyday matters or taught themselves the language. At work lay interpreters acted as intermediaries between management and the workers.

Children often translated for their parents on visits to official bodies and the doctor's - a role reversal placing a lot of responsibility on the children! Filiz Calayir tells how she, a juvenile herself and with no understanding of the law, would intervene on behalf of fellow Turks with the immigration authorities and the Employment Office.

And how did the school system respond to the immigration? Whilst the children of the first generation of immigrant workers continued to receive little educational support, today it’s taken for granted that additional German lessons, German as a second language and native language classes are part of the school day. According to Nataša Maroševać, from the Schools Advice Centre for Immigrants, "intercultural encounters" instead of "foreigners' education" and the social value of multilingualism were key features in the turnaround from the 1990s onwards. Language is and remains a very controversial issue in the integration debate.

Tuğba Şababoğlu explains that language is also a means of self-empowerment: she consciously speaks perfect German to challenge the stereotypical expectations based on her appearance.

LANGUAGE AND THE INDIVIDUAL

Güldane Gönül, who spoke no German when she was sent to the local school in Jenbach at the age of 13, has photographs which remind her of discrimination by other pupils, e.g. on a school trip to Vienna (here with her brother) or during swimming classes. 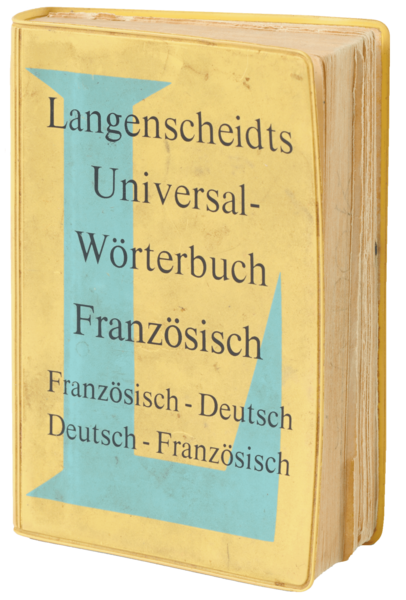 Sadok Bacha taught himself German with the help of this German-French dictionary. He bought it in Vienna on his arrival from Tunisia in 1977. He needed to speak some German for his work as a waiter.

Ömer Yıldız writes about his experiences as an economic migrant in his poetry.

This poetry album with entries in Turkish and German and her 1987/88 school-leaving certificate are Yasemin Duran's souvenirs of her schooldays in Telfs. For her excellent results, she won prizes in the form of books with dedications by Helmut Kopp, who was then Mayor of Telfs.

In 1992 Johann Hechenberger, a teacher at the Anton Auer School in Telfs, organised a project in which the pupils produced “Unser Buch” (Our Book). The book focusses on diverse cultural backgrounds and countries of origin as well as racism and prejudice. 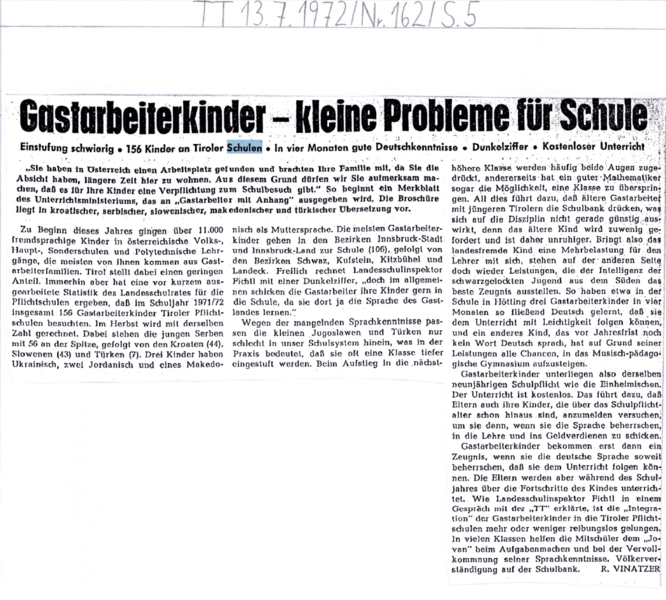 In 1972, the “Tiroler Tageszeitung” carried an article on the language courses and multilingual counselling services provided by the Arbeiterkammer (Chamber of Labour). Because of their poor German, “guest worker” children were often placed in much younger classes. The difference in age doubtless reinforced the lack of contact.