Work was what brought people to live and stay in Tyrol. The Turkish media had been reporting that Austria was suffering from a shortage of workers and in 1971 20,000 people made use of the Recruitment Agreement and left Turkey on a one-year work visa. With the money they earned they could support their family in the country they’d come from, or build a new life on their return. Many of the migrant workers in the 1960s and 1970s came from Turkey, the former Yugoslavia and the Philippines, intending to stay only for one or two years. Things worked out rather differently, however.

In October and December 1973, Clarita Ocheda and Merly Tibang made their way to Tyrol to work in nursing and care for the elderly. They’d been recruited by Father Daberto - St. Joseph's missionary to Mill Hill – who’d heard about Austria's shortage of nursing staff.

The two women, 18 at the time, say that a sense of adventure was also a factor. They only started to learn German by talking to the residents in old people’s homes. Two of Merly’s enduring memories are her impressions of the first snow and the uniform, thin and much too cold, which she would never give away.

Güldane Gönül, only 13 years when she arrived in Tyrol, had a far less positive experience. She describes her new home as cold and not very welcoming. She travelled from Istanbul to Jenbach with her two siblings, their aunts and uncles in Turkey no longer wanting to be responsible for the three children. From 1976, the so-called "family reunion" meant that non-working members of the family could come and join the migrant workers. However, parents were often only able to take care of their children by alternating day and night shifts.

What would you miss if you lived and worked in another country? What reminders of home would you bring with you? 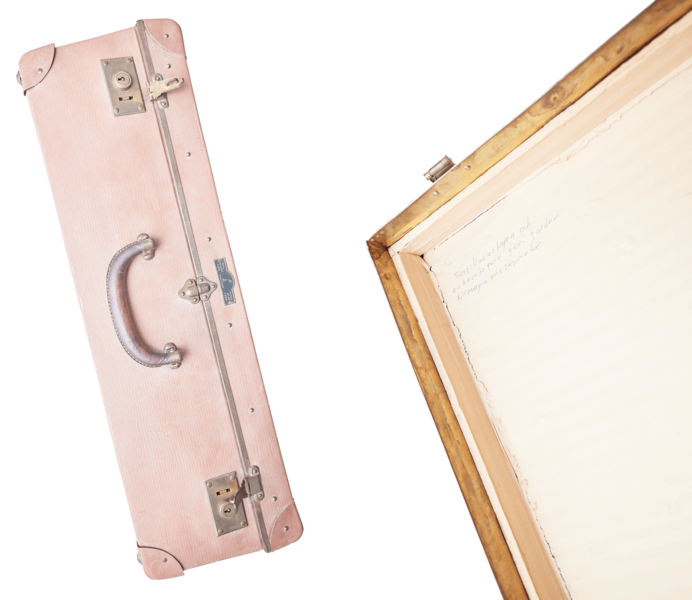 In 1974 Hasan Yılmaz travelled to Vorarlberg at the age of 18 to become a “guest worker”. He did so two years after his father, who bought this suitcase in Istanbul for the purpose. “Dear brother Mustafa, please return the suitcase; we will need it.” That was the message in the suitcase written by Hasan's wife, who has lived in the Tyrol since 1980. 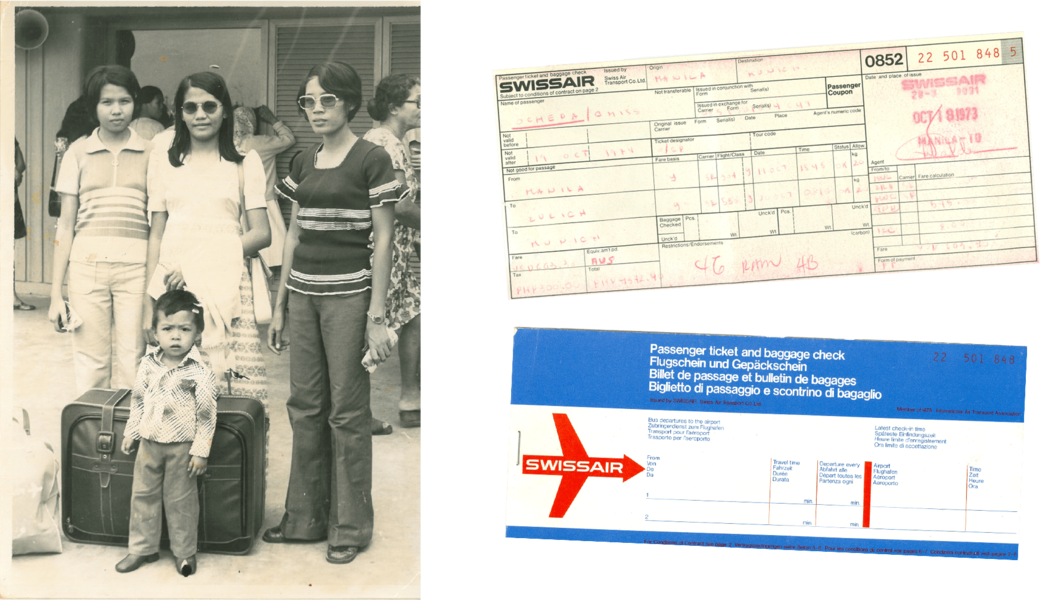 Like many other Filipinas, Clarita Rohrer, née Ocheda, was recruited to the Tyrol as a carer by Father Daberto. The photograph shows Clarita Ocheda shortly before boarding her flight in Manila in October 1973. She was met in Munich by Father William Parschalk, who looked after Philippine carers in Austria. 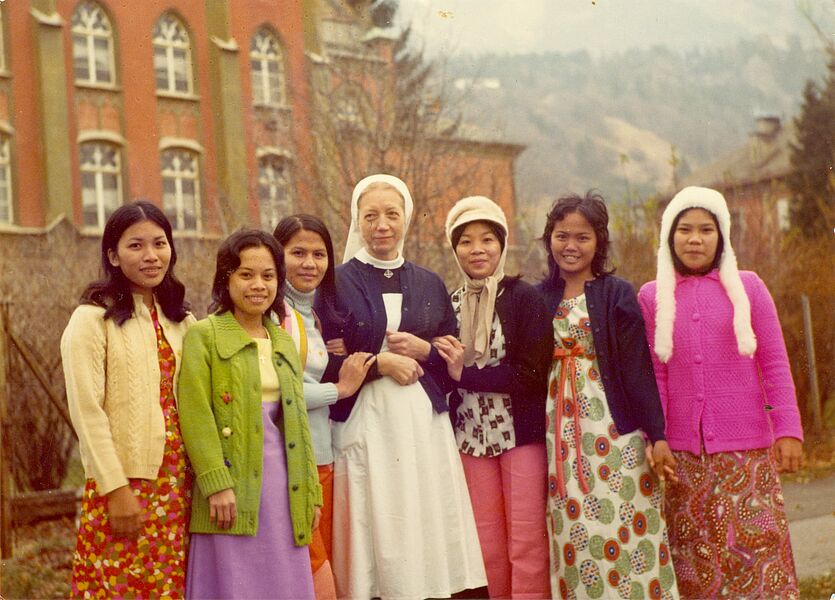 The Tyrol welcomed Clarita Rohrer with snow and cold weather. In the photograph taken outside the Malfattiheim, the old people's home where she worked, she is wearing this light blue pullover, the only warm item of clothing she brought with her in 1973. 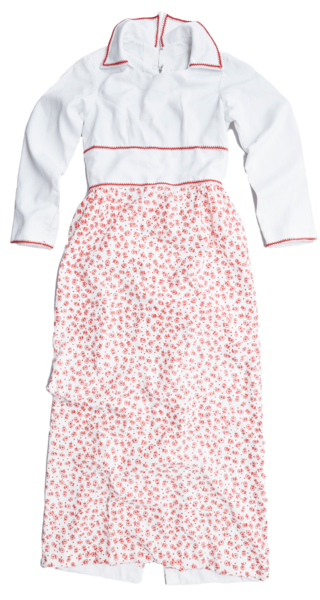 Merly Baumgartner still has the summer dress she wore on her first journey to the Tyrol in 1973.

In 1961 the “Tiroler Tageszeitung” reported a serious shortage of labour in the construction, textile and metal industries and the catering trade. 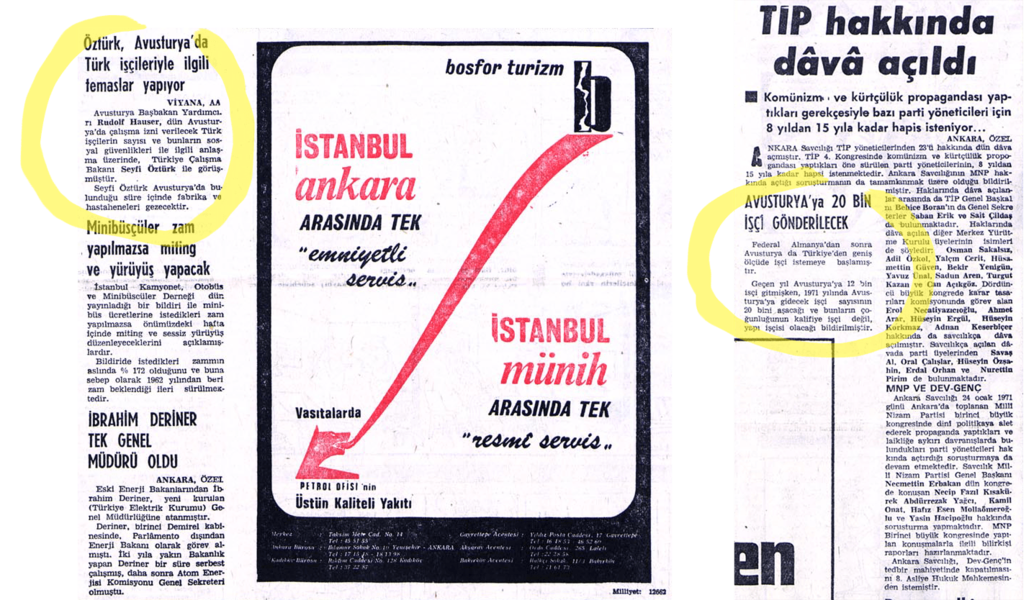 Turkish newspapers drew attention to the demand for labour in Austria: In 1970, 12,000 Turkish workers responded to the recruitment campaign, followed by a further 20,000 in 1971. On 20 August 1970, the Turkish newspaper “Milliyet” reported on the visit paid by the Turkish Minister of Labour, Seyfi Öztürk, to Austria's Vice-Chancellor Rudolf Hauser. 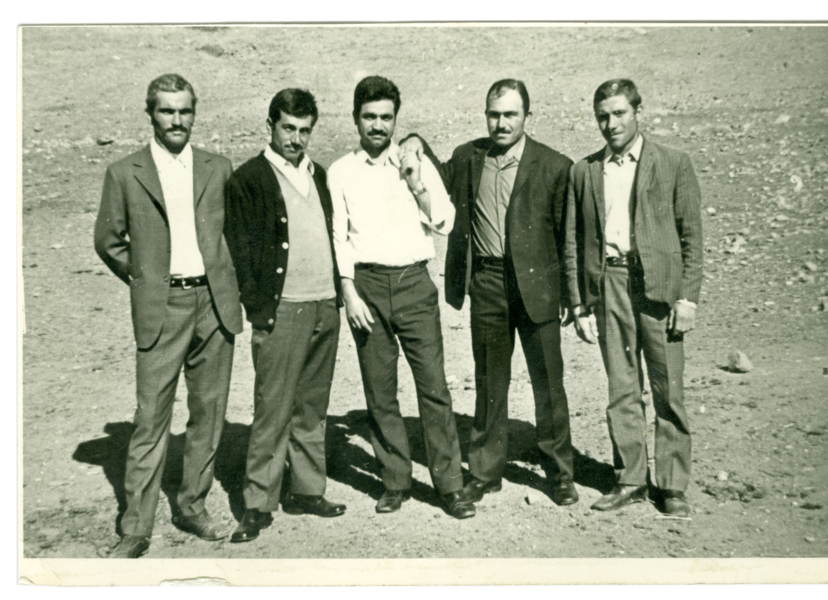 Cengiz Riza (centre) was already working in Fulpmes in the Stubai Valley. During a visit to Uşak, he recruited other fellow Turks like Osman Arıkan (2nd right). Uşak/Turkey, about 1971