The general economic upturn in the 1960s led to a shortage of workers in Austria. Official recruitment agencies, initially in Madrid, then in Istanbul and Belgrade, were to supply the missing workers from abroad. Mara Ivkić tells us that she was 18 when she was recruited by Swarovski – she’d heard about the company from a friend of her mother’s who was already working in Tyrol. The migration of workers, however, was soon taking place outside of the formal channels. The group photo with men from Uşak in Turkey is evidence of the so-called "chain applications" by friends or relatives. This often resulted in close ties being forged between places in Tyrol and places in the countries they’d come from.

In addition to construction, the metal and iron industry and catering, it was mainly textile companies that benefited from workers from Yugoslavia and Turkey. Walter Ambros, former manager of the textile factory Herrburger and Rhomberg in Innsbruck, explains that there was a shortage of local workers because of the low wages and the night shifts.

The photos of the work place and company functions are in part staged to provide personal memories. Presumably they were also a way of communicating with those who’d stayed at home. But they say nothing about the system’s legal uncertainties and inequalities which the guest workers experienced: the lack of promotion opportunities within the company, the impossibility of changing jobs, the low wages and the temporary employment permits which were a prerequisite for the right of residence until the 1990s. They certainly say nothing about the prohibition of passive voting rights in company matters, which wasn’t introduced till 2006, and nothing about the limited vocational and educational opportunities for migrant’s children.

Documents such as the foreigner’s work card, employment permit and work permit are evidence of exclusion and discrimination. Lots of former guest workers have kept them to this very day. 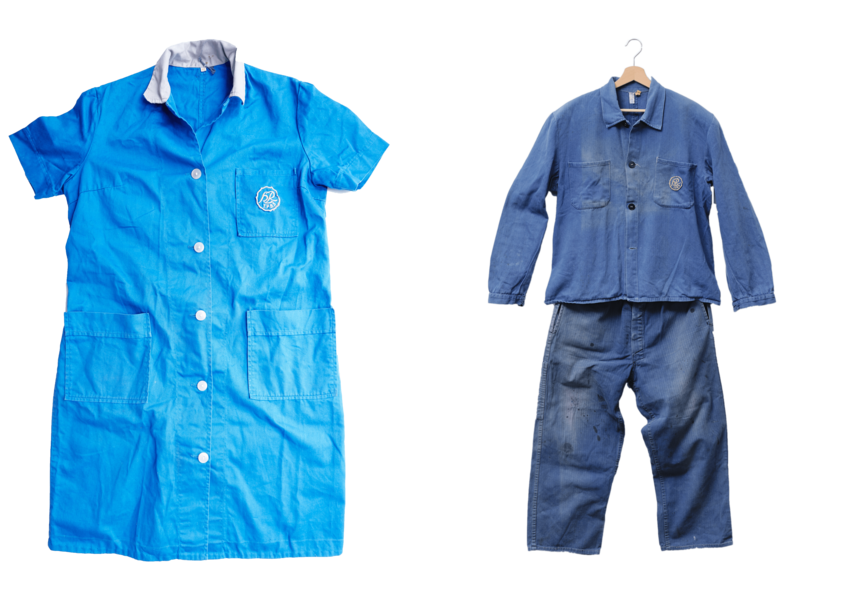 Kata Ivanović was employed by Herrburger und Rhomberg for 12 years. She and her husband Slavko Ivanović have kept their old working clothes. 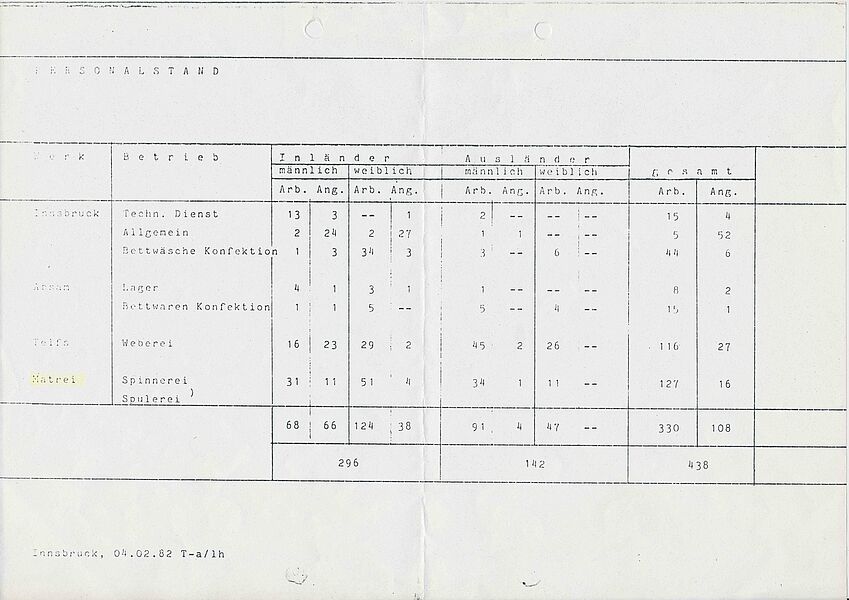 When the economy contracted, foreign workers were the first to lose their jobs. While they accounted for about two thirds of employees at Herrburger und Rhomberg in the 1970s, their much smaller share of the labour force in 1982 was a sign of the pending closure of the company's Tyrolean facilities in Innsbruck, Absam, Telfs and Matrei and the general decline of the textile industry.

Fadime Eker, née Evren, Abdulkadir Özdemir's sister-in-law, worked for Herrburger und Rhom-berg in Innsbruck from 1973 to 1976 and then for the Multessa textile company.

From 1838 to 1983, the Vorarlberg textile manufacturer Herrburger und Rhomberg had a factory in Innsbruck, on the site now occupied by the Sillpark shopping mall. Aerial photograph, Innsbruck about 1965

Original in the possession of Innsbruck Municipal Archives

The entries in Mara Ivkić's aliens employment card include the temporary employment permits granted between 1970 and 1976. The card was introduced as a mandatory document in 1966 on the basis of the 1933 Foreign Labour Regulation, which was adopted from German law in 1941 and remained in force until the end of 1975.

In 1979, Selahatdin Arıkan came to the Tyrol at the age of 12 as a family reunification case. After finishing school, he worked as a dishwasher at the Panoramarestaurant in winter and for the cablecar operating company in Fulpmes in summer (1980s). After completing his apprenticeship as a cablecar engineer, he was given a job at the Schlick 2000 Ski Area in the Stubai Valley. Austrian citizenship was a requirement for the apprenticeship.

Multilingual brochure for the election of the works council at Tiroler Röhren- und Metallwerke (TRM), Hall 1980